The global electronic cigarette market is already valued at more than $3bn, and analysts predict it will be triple that by 2017.

Despite the words of warning from health professionals, the humble ‘e-cig’ has grown so popular that big tobacco has reason to be concerned. Currently, the global e-cigarette market is worth around $3bn (see Fig. 1), which is impressive, but that figure is expected to grow to more than $50bn by 2025, according to a recent report. With growth figures like these, big tobacco is naturally worried about the industry overtaking its own. So, in an effort to capitalise on this growing trend, many of the world’s biggest tobacco companies have jumped on the bandwagon, entering the market with their own iterations.

Philip Morris International (PMI), famous for producing cigarette brands including Marlboro, L&M, Bond Street and Parliament, made its first foray into the e-cig market with its IQOS smokeless cigarette near the end of last year. The company describes its new device as a middle ground between traditional cigs and their electronic counterparts.

Speaking at a conference hosted by Morgan Stanley in late 2014, PMI’s CEO André Calantzopoulos explained how the launch of the device, which has since gone on sale in Italy, Australia, and Japan, was a “landmark moment”, which has begun the a “ground-breaking new chapter” in the company’s history.

So far, PMI has also been reluctant to make too big a dive into the electronic market, acquiring the UK-based brands Nicolite and Nicocig, but it is likely to strengthen its position globally, if growth rates continue as predicted.

PMI isn’t the only tobacco company looking to secure a piece of this highly lucrative market. Reynolds American and Imperial Tobacco have both dipped their toe in too. In fact, the former sold the world’s biggest producer of e-cigarettes, Blu, to the latter, so that Reynolds American had the necessary capital to finalise its acquisition of Lorillard Tobacco, which is responsible for the manufacturing of US brands, including Newport Maverick, Old Gold, Kent, True, Satin and Max.

Imperial Tobacco’s decision to purchase Blu and Skycigs in the UK, along with the development of its own brand of e-cigs called Puritane, exemplifies the company’s commitment to this promising market. It also establishes them as the market leader for the time being, which could lead to the company raking in massive profits should the market grow in line with analysts’ opinions.

Meanwhile, Reynolds’ decision to sell Blu in order to consolidate a greater share of the tobacco market is a clear indicator that the company is more concerned with the profits to be had from the $35bn industry, at least for now. It has, however, held onto the vaporisor brand Vuse, which is sold in the US, so they haven’t exited the market altogether. 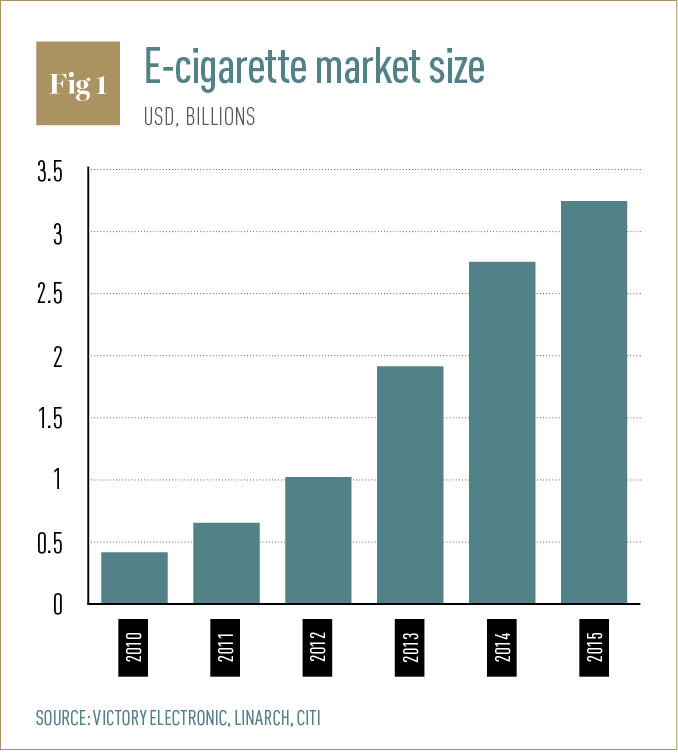 In all honesty, it would be folly to do so anyway, as the electronic cigarette market is going to be the new battleground for big tobacco, because, like it or not, the public are better informed about the risks associated with smoking, leading many people to quit. And with retailers touting the benefits of switching to vaporisers those who still want their dose of nicotine without the smoke have found a viable alternative.

But while many medical professionals concede that the growth of the e-cigarette market has helped drive down the consumption of cigarettes, the jury is still out regarding the safety of electronic cigarettes.

“Over the last 50 years, 20 million Americans died because of tobacco. We are fiercely committed to preventing the tobacco industry from addicting another generation of smokers”, said Nancy Brown, CEO of the American Heart Association in a statement.