For those new to vaping, this is another aspect of personal vaporizers that can be very confusing. In this guide, we’ll look at some of the most common types that beginner vapers use and discuss some of their advantages and disadvantages.

In this post we are going to cover several difference E-Liquid delivery devices. Maybe you’ve tried some or several of them, but the purpose is as always, is to educate and let you know that there’s several options to allow you to customize  your vaping experience.

The topics you’ll find in this post will cover the following: 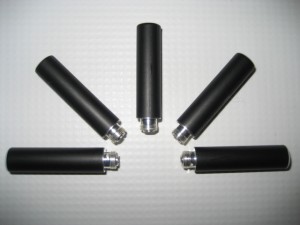 An atomizer filament threads through the absorbent material. This filament heats up when the battery is engaged and vaporizes the E-Liquid, creating the vape or “fog”.

510 cartomizers are available in various capacities and resistance ratings, the most common being .9ml and 2.7-3.1 ohms (standard resistance). A .9ml cartomizer’s total length is around 40mm long.

Many 510 cartomizers can be refilled 4-6 times before needing to be entirely be replaced. They are refilled by removing the end cap and carefully dripping or syringing liquid onto the filler material, while paying close attention to avoid the hole in the center.

The main advantage of this style of cartomizer is is compact nature and the fact that if properly filled, the E-Liquid doesn’t leak; it is immobilized in the filer. The main disadvantage of the 510 cartomizer is that the entire unit needs to be disposed after a few refills; however, is probably equivalent to every couple of days for a very heavy smoker. For an average smoker using a personal vaporizer exclusively, a 510 cartomizer might have a serviceable life of a full week before needing to be disposed of.

The most popular device of this nature is the Boge 510 Cartomizer.

The CE clearomizer range has undergone various steps in its evolution  –  and each generation has delivered considerable improvements.

The early CE’s (up to CE3) are used with 510 batteries or eGo batteries with a 510 thread and look like a 510 cartomizer except they are clear and have no filler material. Some of these models were the first to use a silica wick. They were good for their time, but many had issues with taste, overheating and reliability.

There are no serviceable parts inside a CE2 or CE3.

The later, more rout CE4 and CE5 clearomizers suit eGo type batteries. The development of these clearomizers was a huge leap forward in vaping. In addition to current models having a much larger capacity; they are also easier and quicker to refill and offer a cleaner taste.

E-Liquid is added by unscrewing the mouthpiece and dripping or syringing the juice in, taking care to avoid allowing liquid into the small hole in the center post. 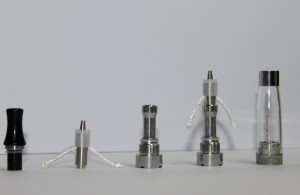 In a CE4/5 type of clearomizer, the E-Liquid is soaked up by a silica wick. The part of the wick obscured by the center post atomizer has a very think gauge wire wrapped around the wick. When the battery is engaged, this wire heats up; creating the vapor.

The atomizer head in CE clearomizers will usually last a couple of weeks after daily refills.

CE Clearomziers are available in various configurations; currently the most popular being the CE5.

A CE5 clearomizer is different from a CE4 clearomizer in that the CE5 has an added advantage of being “rebuildable”; meaning the CE5 atomizer head can be replace for just a couple of dollars and some vendors also offer tank replacements.

Probably the only disadvantage of a CE5 (and most Ce’s of this nature) is that the joint between the metal collar and tank section can weaken over time if it’s carried in a back pocket. When bending over, this can place substantial pressure on the tank and collar.

Quick Note On CE Atomizer Headers –
Not all CE Atomizer heads are created equal – for example, some have a single thick wick, others have multiple tails. Some have quite short tails, and others are long. It’s our experience that multiple, long tails work best as the short tails have a habit of not holding enough E-Liquid if vaping quite heavily; which can result in “dry hits” and early failure. It’s also important to match the resistance of the heads to the voltage output of the battery you’re using (see tips below).

Examples of a bottom coil clearomizer are the Kanger Protank 2, Protank Mini 2, and the Apire BDC – the latter makes things a little confusing as it’s also called a “CE5” and the outer construction is a similar design to the top-coil long tails Ce5’s.

The eGo T is an older type of system that uses a separate cartridge and atomizer. The cartridge also acts as a mouthpiece.

A Type A E-Liquid cartridge holds approximately 1ml of E-Liquid. The cartirdges are filled by prying off the silicon plug at the opposite end of the mouthpiece, adding the E-Liquid and then repalcing the plug. When you push the cartridge into the atomizer, a spike in the atomizer will pierce the plug, allowing the juice to flow.

The eGo T Atomizer is a non-serviceable unit – and this is its major disadvantage. However an eGo T Atomizer can last anywhere from 2 -6 weeks. Serviceable life can be extended by using the same E-Liquid flavors, as changing flavors can create odd and unpleasant tastes.

The eGo Atomizer and Cartridge is an enhanced version of the eGo T system. The cartridge is the same, but the atomizer in the eGo C is rebuildable, so all components can be replaced.

The most commonly replaced component is the eGo C atomizer head, which is very inexpensive to buy. If using different flavors, it’s suggested to use a new head.

The eGo W Clearomizer system is another older system – it consists of a mouthpiece, 2ml clearomizer and casing.

The eGo W clearomizer is filled via a small hole in the top of the silica plug.

While the mouthpiece and casing can be re-used when the clearomizer unit wears out (usually after a few weeks); the system is most often sold as a complete unit. The eGo W is generally viewed as being not as good as teh CE5 system.

One other clearomizer-type system we’d like to mention is the one used with a GT850. This operates in a similiar way to the CE mentioned earlier, but instead of an eGo thread, it uses a 510 threading and has a much larger E-Liquid capacity – 3ml. For use with the GT850 battery (which has a 510 thread), the GT Clearomizer is a rugged system not prone to tank/collar separations and its capacity means that even for heavy vapers; a single tank can take most through an entire day.

The GT clearomizer is filled the same way as a CE and it is also rebuildable, using the same atomizer head as a standard CE5.